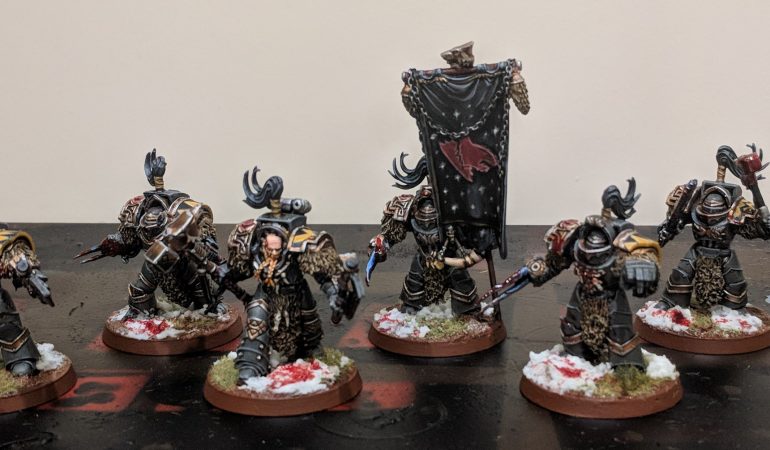 Finally, they are finished.

This was through no real fault of the miniatures themselves, or the difficulty of the modelling or painting or any of that. Unfortunately, my Varagyr were simply victim to several bouts of productive procrastination. After waiting for what seemed like forever for some official ForgeWorld sculpts, and being largely disappointed by the end result (despite some very nice features and details), I believe I’d ordered most of the parts to make these Varagyr somewhere back in January.

It took four months of on-and-off work, which may well be the longest I’ve ever worked on a single unit – but they are finished.

The following period saw an awful lot of my miniature priorities shifting and changing so rapidly that it would make a Greater Daemon of Tzeentch look on in fear. Over the festive period, new rules and several new models for my main Age of Sigmar army, the Maggotkin of Nurgle were released, and this resulted in some rapid catch-up hobbying in order to ‘modernise’ my force a little bit. After I caught up with my Maggotkin, I’d started to get an awful lot of games of 40K in – and given my recent completion of a bunch of shiny new Horus Heresy toys, I’d wanted to make my Vlka Fenryka a little more suited to the landscape of 40K.. thus, the Wulfen, Bloodclaws and Razorback turrets. In fact, aside from a one-off learning game to get to grips with the 7th edition ruleset, there wasn’t much Horus Heresy in my immediate future, and so a unit I couldn’t use in Warhammer 40,000 felt like a sub-optimal use of my time.

Somewhere in the middle of all of this, I sold my Khorne Bloodbound army and decided to use the leftover Skaven from that force, refurbishing the remants and a load of ‘pro painted’ eBay Clanrats into a pure Skaven army for Age of Sigmar. But more on that madness in a future post, this is about the Varagyr. Here’s a proper picture of the unit!

What really got me back onto the Varagyr was the growing impetus to start a second legion for the Horus Heresy.

Yeah, I know; I hate myself too.

Moving swiftly onwards before I fall into a long-winded tangent about why it’s important to have two fully painted, diametrically opposed forces for a system that you want to encourage more people to invest in (it is), I’ll throw in that nothing seems to motivate me to finish off a project quite like the desire to start a new one. Starting a new project means reading up on a bunch of fluff, looking at artwork and seeing what other people have done with their miniatures… and yeah, it means dropping wads of cash on shiny new boxes of shiny new miniatures, exploring in-depth sections of the ForgeWorld catalogue that you mightn’t have lingered on before and theorizing over what fancy conversions you could put here, what new units might make more sense, and so on and so forth. It’s exciting is what I’m getting at, and it makes me really want to just get on with it.

As a rule, I never properly start a new project without finishing off my previous project. There’s exceptions to the rule – I’m now moving onto my supersecretnewlegionproject (spoiler: it’s Iron Warriors), and I’ve maybe got 4 more Seekers in a state of limbo (base coated and washed, need highlighting) that could use a little TLC and an unbuiilt Deredeo Dreadnought that I bought to properly cover all my bases which I’m unsure whether I’ll save for my next project or not. I’ve also got a Venerable Dreadnought and a Bjorn the Fell-handed model for use in 40K for this army that, again, are sitting built but unpainted.. still, those are all nice little additions that I plan on painting as the need arises. I have other anti-air solutions (namely, my Fire Raptor with autocannons) for 30K, I have enough Seekers painted to field a unit of 5 if I so wished, and my current 40K army list that I’m running does not have space for a Venerable Dreadnought or Bjorn (yet). While the Varagyr sat unpainted, I knew the Heresy Wolves were incomplete – Russ was without his Kingsguard, I had models that took a sizeable investment in planning, component purchase and assembly sitting around incomplete (and thus, of course, rendering the former worthless in my mind), and – an unintended benefit of this blog – I knew I had two WIP posts about them sitting timestamped online – with each passing second a testament to my lack of follow-through. How could I start posting about my (now already finished) Skaven army, never mind this impending (and ambitious in scope) Legion project while the Varagyr Trilogy was left unresolved?

I covered the components lists and model composition in early WIP posts, so today, I’m going to talk about the paint job.

These Varagyr models took me somewhere in the region of a weekend to paint, all-in-all. They were all sprayed with Mechanicus Standard Grey, had their gold trims, silvesr, browns and blacks picked out along with a rough first coat of yellowish brown for the shoulder pads, before getting an all-over wash of Agrax Earthshade. That was the first, boring step.

For highlighting, I decided to start with their shoulder pad markings first, being one of the trickier parts but a relatively small and isolated component of the mini. As a rule, I always try and batch paint one relatively interesting area of all the minis in a unit/batch first; by getting the most taxing part of the highlighting done first, it reduces the amount of start-to-finish time on each of the minis, should I decide to switch between batch painting steps or just start-to-finishing. I’m not even actually convinced particularly that batch painting in the highlighting phase saves me any time (as opposed to start-to-finish painting each mini individually), at least the way I do it (I’m not a big glaze guy), but it’s an important weapon in my arsenal of ever-changing mind tricks I play on myself to keep me interested. The joy of painting, for me, comes from that sweet moment where this ugly blob of paint you’ve been pawing over for hours suddenly starts to resemble a finished miniature, and it’s a delicate balance between batching steps (metallics, greys, lighter greys, furs, etc) to reduce the overall time between that jolt of endorphins vs just finishing off another one from the batch and claiming my next hit of sweet, satisfaction.

The shoulder pads, like my Tartaros Terminators, Contemptor Dreadnoughts and my Veteran Tactical Squads all have distinctive yellow-and-black shoulder markings to distinguish them from the rest of the force as ‘Elites’. And again, like the Tartaros Terminators, I did my best to give each member a unique marking, switching between different patterns of yellow or black ‘spikes’ creating stripes, Zs, tooth or W designs. In the end, I only managed to mess up once, and created a single ‘almost’ duplicate, and I’m overall happy with how this went.

The rest of the Varagyr were a fairly standard affair for my VI Legion, with frost weapons being given a couple blue glazes over their edges to differentiate them a little from standard power weapons. The ‘Wolf Standard’ in the unit was given a fairly basic and unambitious paint job, with my first attempt at freehanding ‘stars’. I dunno, I might return to the standard sometime to try and improve upon the design with some different, faintly coloured nebulas, but I’m happy with the effect from arms length. It’s a Wolf head, it’s a space background. Space Wolves. Yep.

With the Varagyr done, I’d say I’m more or less happy with the state of completion of my first forray into Warhammer 30K. I shared earlier what bits and bobs I’m leaving unfinished for now, but how about a look at The Rout as it stands today?

Looking at it from above, it’s a hell of a lot of painted miniatures. So, what are we looking at here? Well, somewhere in the region of 5000pts in both 30K and 40K. As for specifics? Well..

And that’s just about it. I’m personally pretty pleased to see how far this army came from an impulse buy of some bits and pieces (mostly Bolter-armed Mk III Marines, a couple characters, a Contemptor and a Rhino) from a local classified and an impulse buy of Leman Russ on eBay about 10 months ago, and I’m pretty jazzed to see how fast my supersecretnew30k5000ptsproject (read: again, yes, it’s Iron Warriors) is going to come together to match it – I’m just about finished building the models, and will be moving onto painting shortly.

In the meantime, I’ve got some cool new Age of Sigmar minis ready to show off, in the form of my new Skaven Masterclan army, so watch this space for updates in the near future.