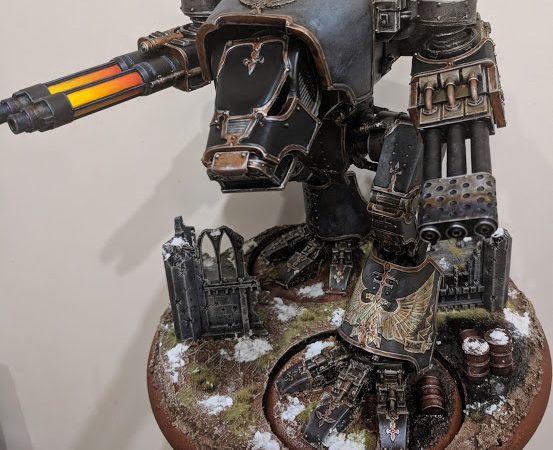 Here it is, in all it’s glory. The single largest miniature I have ever fully assembled and painted – the God Machine, Mars-pattern Warhound Titan Canis Ignis.

All things considered, I think the paint job went about as smoothly as the assembly did. There were very few hiccups on the road, and everything kind of came together about as I’d hoped it would.

I suppose the most sensible place to begin with a project like this is the colour scheme. I mulled over a bunch of different schemes, from established Titan Legions such as Legio Gryphonicus to experimenting with wildly different approaches such as transparent paints and metallics or even doing a homage to the late, great Robin William’s own vintage Armorcast Titan. In the end though, I kept looking at photographs of my Space Wolves and couldn’t quite shake the feeling that a Warhound in the grim storm-cloud grey and red of the VI Legion would just look hideously, awesomely imposing. I did a little digging, and I also discovered there is a known Titan Legion known as Legio Ferrax which does not have any confirmed colours or heraldry, but are known as the Iron Wolves. As a Space Wolves and a future Iron Warriors player, this felt like a great and fitting compromise. I considered perhaps doing the model in the Space Wolves colours but adding some chevrons in places as a midway (and not exactly unprecedented) compromise.. but in the end, I decided that I’m not really all that into chevron‘s and besides that – the Titan was getting based. The Titan had to be based to look like one of the armies, and the Wolves of Fenris were always going to win that battle.

As I mentioned in my post about construction, the base is designed to be separable depending on my needs – there’s two 5 inch, bevelled wooden circles for the ‘snowshoes’ when gaming, and the full 12″ bevelled wooden circle with a couple layers of corkboard with inlays cut into in order to sink the snowshoes in. This was a bit of a faff, but not overly complicated – the boards were basically two sheets with semi-circles cut on each side which meet in the middle. I used a pair of kitchen scissors to cut the rough shapes and then tidied it up with an x-acto knife. Being corkboard instead of styrofoam, the resulting finish is rough around the edges, which is fine as I was texture-painting over them anyway. Painting over the base with texture paint was a little bit weird – it’s a bit like frosting a cake. You need a big spatula (bigger than a GW texture spreader anyway!), and a lot of texture paint. This pretty much drained my reserves of Vallejo Texture paints to properly cover.

My original plan with the base was to do some more inlays to let me socket some Marines, etc into the base like the Titan itself, but having just cut two bigger wholes, I decided I wasn’t into repeating the faff. And besides, it would be nice for the base to standalone a little bit! So, I textured it and painted it with my usual method for Space Wolves. For base decoration, I decided to go old school and picked up some ruins and oil drums from the 3rd Edition Warhammer 40,000 boxed game – something I remember quite fondly from the walls of my local Games Workshop back in the day. The two corner ruins give the impression that the Warhound is smashing through impassable terrain (for a puny infantryman) and again the barrels give that proper sense of scale – I put one on a snowshoe, with the rest on the base and used black ink and Vallejo Still Water to create the oilspill. While I think the patches of snow and grass do a nice job of breaking up the endless brown earthy textures, the oilspill adds a bit of a spot colour and calls attention to the barrels – which, in turn, reinforce the sheer scale of this miniature. Aside from that, the barrel and oil on one of the snowshoes help me remember which way the Warhound is meant to sit on the base.

Working out way up, the next stop on the God Machine tour is the marble aquilla on the Warhound’s shin plate.

I’m quite proud of how this particular portion of the model turned out, and I think it’s probably the most intricately detailed part on the whole model. I had very nearly simply painted it in gold, but the little modelled cracks and the whole aesthetic of the thing screamed ‘paint me marble’. This was my first time attempting such a thing, so I think I built it up over about 20 layers, each time trying to ‘correct’ the previous. The initial layer was just a couple thin coats of a creamy white, followed by a Seraphim Sepia wash and some light drybrushing. After this, I stained a few areas with some light puddles of washes and glazes – some Seraphim Sepia, others a mixture of Guilliman Blue and Waywatcher Green. After that, I decided to give the wings and feathers and outline more definition, and edge highlighted the whole thing. Finally, I used some slightly watery Vallejo Hawk Turquoise paint and Sepia Ink to paint some thin lines and streaks for the veins in the Marble. After this, I carefully drybrushed the whole thing with white again to bring out the edges further and break up and muddy the lines. When the whole model was finished and Dullcoted, I gave the whole thing a very thin coat of gloss varnish to give it a slightly smoother and glossier finish than the rest of the model. Probably the single most eye-catching part of my Warhound is the warm, bright glow of the Turbo Laser. This took a bit of time to achieve, but honestly wasn’t as difficult as I expected it to be. I built it up over a white basecoat from light to dark, in order of AP Daemonic Yellow, Sun Yellow, Gold Yellow, Orange Fire, Hot Orange, Bloody Red down to Heavy Red. These I applied first in flat layers. I blended and smoothed out the gradient using a mixture of glazing to bring everything together (particularly on the yellow side) and wet blending the layers together (on the orange/reds).

As on my Fellblade, I’m not 100% pleased with how the heat-staining on the Turbo Laser or Inferno Cannon came out. I think some of the issue was that I’m trying to glaze over a very dark metal and thus the colour-glazes don’t come out super bright. I’m not unhappy with the effect, but it’s something I think I could work on a bit in future.

So, I’ve covered the guns, the basing, the marble Aquila. Let’s take a look under the hood at my absolute favourite part – the interior. I’ll let it speak for itself for a while. Photo dump incoming!

And that, as they say, is that! I’m fairly pleased with myself that I managed to turn this big box of resin blocks into Canis Ignis in around 20-25 days. Aw, heck, I’m just pleased with myself that I’ve painted a Warhound Titan, after years of lusting for one. It’s been an absolute blast to put together and paint, even if I have absolutely no desire to go back and paint another one of these – or indeed any model of this magnitude – any time again soon (maybe a Thunderhawk or Stormbird in a year or two…).