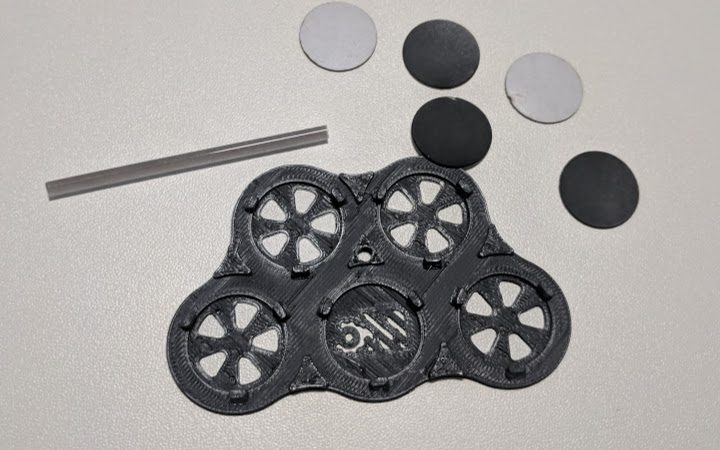 This one’s a bit of a first for Plastic Crack – my first ever product review.

While scrolling through my Twitter feed recently, I noticed a post from Master Crafted Miniatures asking if any bloggers or content producers would like to review their newest product – a set of 3D printed, magnetic movement trays. While typically, this blog is more of a vanity project to present my painted miniature projects to the world (and ramble on about them in the process), I have to say, I was rather taken with the design of these things and jumped at the chance to review them.

I’ll just stick a brief disclaimer here that these samples were sent to me free of charge for review purposes, and that Ben seemed genuinely interested in getting some feedback for them – so that’s what I intended to put here. If I like them, I’ll say I like them and if there’s anything I don’t like about them, I’ll say that too. With that in mind, let’s have a look! A couple of days following our Twitter exchange, I received this compact little box in the post, containing a sleeve of bubblewrap and a few baggies of bitz. First impressions, the packaging was perfectly suitable and I appreciated the first class delivery. Inside the box, four little baggies containing one 40mm tray, a pair of 32mm trays and a 25mm tray, as well as a small baggy of 2mm magnets. Each tray fits five miniatures in total. A quick check on the website, and these are priced at £3.50, £3 and £2.50 each respectively, which puts their price point somewhere in between Element Games’ own-branded MDF movement trays and their movement trays that are supplied with magnets, which seems fair to me. One thing I wouldn’t have minded seeing with these trays is a bulk discount for large orders – were I to outfit my current 2000pts Skaven army, for example, it would end up costing in the region of £60 for all the movement trays, which is absolutely terrifying. My Maggotkin of Nurgle on the other hand would run me less than £30 for the equivalent points, so do bare that in mind.

Each tray baggy contains the tray itself, five self-adhesive discs of rubber steel and an acrylic rod to help manoeuvre the tray around. I guess you could call this some assembly required but it’s a lot less faff than gluing together an MDF tray. The trays themselves are a couple millimetres thick, and feel pretty really robust despite a bit of a rough, 3D printed appearance. The underside is perfectly smooth and flat, however the topside of the tray has very visible 3D printing striations. There is a little bit of flex to them akin to a plastic school ruler, but they’re a far cry from ‘floppy’ and feel solid enough to withstand the usual sort of wear and tear.

Aesthetic concerns however entirely vanish when you stick some miniatures onto these and see how little of the tray is actually visible; in fact, I was considering texturing these trays to cover the striations but a coat or two of filler primer would pretty much do the job I think. To illustrate what a tiny footprint these trays have, I took some shots with some 2nd hand High Elves for the Middle-earth Strategy Battle Game that came in the post today.

I have to say, I’m absolutely blown away by the miniscule footprint that these trays have on the miniatures – I’ve honestly never seen anything like it. Magnetism is something I’ve always appreciated on movement trays – I lined my movement trays with magnetic sheets back in my Warhammer Fantasy days, and I fairly recently spent a lunchtime punching out discs of 25mm rubber steel myself to line my MDF movement trays for my Clanrats, but the design of these trays is something else entirely.  Three raised nubs help keep your miniatures centred over the correct space on the tray, while the magnetic bond removes the need for a lip of sorts to keep the miniatures from shaking and slipping off of the tray, meaning the miniatures can sit almost base to base (within 1mm) with each other on the tray, and even get properly base to base with other miniatures on the tabletop without needing to lift them off the tray.

The nubs are a clever design choice, and I appreciate the decision to keep them inside of the base for a clean look and no risk of scraping paint off of the rims of bases. The minimal contact points also means that if you have glued your magnet to the edge of the base, you won’t need to rotate too much to get your miniature to fit over. If I could make one criticism of the design however, it’s that I wish the position of the nubs was rotated by 45 degrees – one of the nubs is placed on exactly 0 or 180 degrees (depending on whether the front of your tray is the 3-wide-end or the 2-wide-end) and this can be a nuisance for slotta bases. It’s not a huge deal, but plenty of slotta-based miniatures are sculpted with the front facing of the miniature being parallel with the slotta clip, and this nubs position prevents them from facing directly forward on the movement trays. Another very interesting innovation on these trays is the acrylic rod, to help manoeuvre the tray about. Here’s some photo’s from the Master Crafted website of how it’s supposed to look when it’s together.

As you can see, fairly unobtrusive. I imagine you could slide the tray around no trouble, or even potentially lift the whole tray with one of the central miniatures, but this is a nice little option to have – especially with more delicate miniatures, such as Moria Goblins or indeed my Skaven Clanrats, etc. It does, unfortunately, lead into my next criticism of the product however. Unfortunately, the hole on the tray for inserting the acrylic rod is not actually wide enough to accommodate the rod. Is this a big deal for wargamers? Well, no, not really. I’d like to think the majority of us are well equipped to take a hand-drill and widen a hole a little bit more, and one could consider this just another step in preparation/cleanup, but it is an extra step that I didn’t particularly expect to have to do.

It did however lead me to consider another nice touch to these trays.

I don’t know if the magnets I was supplied was just to attach to my minis for testing purposes, or whether the next bit of functionality was actually intended or not, but with a little bit of drilling (no more than you would need to do for inserting the acrylic rods), you could very easily fit one of these magnets into the holes in the partition nubs between miniatures. There’s only a single hole in the centre of the 25mm tray, but there is several around the tray in addition to the centre post hole on the 32mm and 40mm trays. What does this mean? Well, it means it would be trivial to magnetise the trays themselves, meaning you could very easily store your miniatures on these movement trays in any magnetic storage/transport solution you have (whether it be a BattleFoam Magna Rack or a rubber steel lined Really Useful Box). This is a solution that I use personally for my Clanrats, using a number of MDF trays with rubber steel discs to hold the individual rats to the trays and neodymium magnets in the corners of the trays to hold them to my Really Useful Box. It works well enough, but I could fit a buttload more in each box tthanks to the considerably smaller footprint of these trays. Additionally, having the magnets glued to a part of the tray that isn’t directly under one of the miniatures avoids any awkward polarity/positioning issues. The trays are thin and lightweight enough that I think there would already be a weak magnetic bond to the storage container from the individual miniatures through the tray, while the direct contact magnet would seal the deal and hold everything securely in place – that’s the theory, anyway. Again, I have no idea whether this was intended in the design or not, but it’s genius if it is and a really great by-product that could potentially be explored and expanded upon if not.

Bottom line, what do I think of these movement trays? I like them. They’ve the smallest footprint of any movement tray I’ve used to date, and that they’re magnet-ready out of the box is extremely handy. Individually, they’re pretty reasonably priced for what they are, although I do wish there was some form of multibuy discount, as getting enough trays for a horde army can get rather pricey for gaming aids – especially factoring in the cost of magnets, etc. Still, it’s exciting to see someone trying to shake-up the formula a little for the venerable movement tray, and I’m looking forward to giving these a whirl in my next few games.

Be sure to check out Master Crafted Miniatures, not only does Ben sell these awesome movement trays, but the site is absolutely loaded with cool miniatures and some amazingly handy aftermarket upgrade bitz suitable for the Horus Heresy and Warhammer 40,000 – including some amazing looking battle damaged pieces and some real holy cow this is so useful why have I never seen these before conversion bitz that I’d happily fling my stamp of approval on.