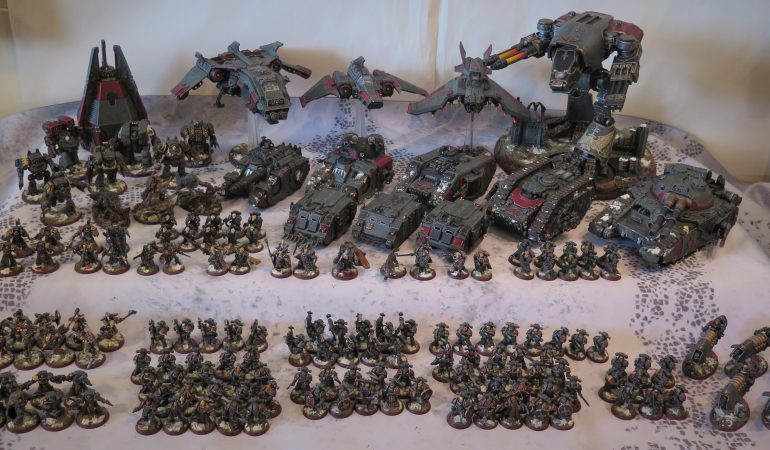 Back in July 2018, I made the bold claim that I was going to “polish off [10,000 points of Space Wolves] sometime before October.”

At the time I posted that, I had finished roughly 9000 points of the army. This was my primary hobby focus for a long time – when I wasn’t working on my Space Wolves for Heresy, I was working on things like Wulfen or Bjorn the Fell-handed to field against my 40K-playing friends. With just 1000 points to go, I figured I’d be done in no time, so I slackened the pace and gave myself a couple palette cleaning projects before I finished them off.

First, it was a new Blood Bowl team, then an Armies on Parade entry, and then a Middle-earth Battle Company…

Of course, the Battle Company became a full-on army, which became a full-on investment in the system, which turned into three full-size armies and two smaller all-hero warbands, plans to re-enact the Fellowship of the Ring and beyond.

Somewhere along the line, I even found the motivation to rescue my Iron Warriors project from it’s 6 month long limbo period – and yet, I still couldn’t quite face working on any more Space Wolves. October was pushed back to December and eventually the whole thing was back-burnered.

No more! I’m pleased to say that at last the dust has been well and truly shaken off. I’m back on the Space Wolves and hell bent on one objective -to reach the coveted Ten Thousand Points.

This has been a somewhat significant milestone for myself – and for this blog. My Space Wolves are among of my most venerable of projects and by some considerable margin my largest. Back when I started this blog, it was a constant output of Space Wolves related content as I grew from a barebones 3000 points list up to this eventual end goal. Since then, the Rout have expanded over twofold in their size and seen the addition of many unique and generic legion units, while this very blog has chronicled some of my most significant additions such as my Varagyr and Deathsworn kitbashes, my Fellblade and my Warhound Titan.

As the months melted away with me building, converting and painting my legion, I made sure to photograph the army as a whole as I hit various smaller milestones. There hasn’t been any particular rhyme of reason to it – just when I’ve had a bit of time and space to get everything together. I started this at a more sensible time, when I had finished my first 3000pts army, and again when I added some big toys and took it up to 5000, and finally – pushing the limits of the largest flat surface in my tiny apartment1 – around the 9000 mark.

Aside from stroking my own (pitiful) ego2, the photos help point out any glaring aesthetic gaps in my collection. At 10,000 points, I’d like my army to be in a reasonably ‘feature complete’ state, so I wanted to make those last 1000 points matter and fill up any areas that looked thin both aesthetically and on my force organisation chart.

From the force organization standpoint, the first thing I noticed that was that my Fast Attack was looking a bit thin on the ground. At over 9000 points, a mere 600pts across two units was allocated to this column of the chart – only 6-7% of the total points and a negligible number of physical units. To add to that, half of that was on the Seekers (a unit that looks, aesthetically, a lot like my Troops – save the yellow/red shoulder markings) and the other was in an Imperial Navy flyer piloted by a Servitor – something had to be done about that!.

To this end, I decided to add not one but two new units to my Fast Attack column. The first of which was a Xiphon Interceptor.

The Xiphon was a dead certain – it’s been on my to-do list since I discovered it existed. Like the Fire Raptor, it’s a great example of what an Astartes flyer could and should look like – aerodynamic as it needs to be to fit it’s function, whilst maintaining the square, blocky aesthetic of the land vehicles. Importantly though, it fills the last flyer niche of the force – the Fire Raptor is there for anti-infantry ground support, the Lightning for taking out heavy armour, and the Xiphon for aerial supremacy – it’s improved jink and anti-jink tracking armament made it the perfect choice for dogfighting.

For my final Fast Attack entry, I had to make a difficult decision between Javelin Land Speeders or Scimitar Jetbikes. Both units had that quintessential ‘Heresy’ factor – a lost, arcane technology with sleek curves that absolutely scream 31st Millennium. They both filled a similar niche – my army had infantry, heavy infantry, armfuls of transports, tanks, heavy armour, flyers and walkers – but no Jump Packs, Speeders or Bikes to speak of. In the end, the Scimitar Jetbikes just seemed the most useful and in-character of the two for my Wolves – not to mention the easiest to wolf up of the two.

From a miniature perspective, looking at my whole force photo, the main thing that bothered me was my lack of mid-sized tanks. Yeah, I have three Rhinos in there, a Land Raider and a Spartan – but none of these especially screamed ‘tank’ to me. The Sicaran Venator was sitting there all on it’s lonesome, dwarfed in stature by my Legion Fellblade super heavy tank. Not wanting to get bogged down edge highlighting a full squadron of Predators3, I decided the only way to rectify this was to get another standalone Sicaran variant.

I deliberated for a long while over which of these I would take. The Venator was always my favourite of the five, but I already had one of those. Neither the Punisher nor the Omega especially appealed to me, which left a final gruelling deliberation over whether I’d get the Arcus or the standard Battle Tank variant with the Accelerator Autocannon. The latter was my preference on aesthetics, but in the end the Arcus won out due to it’s overall flexibility – I didn’t really feel like I needed more anti-infantry/light armour, and between my Deredeo and Fire Raptor, I had my fill of twin-linked autocannons. These reasons along with a complete absence of any kind of artillery in my Space Wolves, led me to pick the Sicaran Arcus as the final battle tank for my VI Legion.

With the Jetbikes and Xiphon filling up my Fast Attack slots, and the Arcus keeping my Venator company in the medium/heavy tank category, there was just one thing bothering me about my collection – the lone Leviathan Dreadnought.

Realistically speaking, I don’t see myself fielding a talon of Leviathan Dreadnought’s any time soon (cool as that may be, particularly if they were all packing double CCWs), but something really bothers me about fielding only a single model of something that comes in Talons or Squadrons in the Age of Darkness. It just doesn’t quite feel on theme to me.

I’ve been waiting for this miniature to release for some time now – in theory, it solves my problem with having a single Leviathan as, when fielded in a Drop-Pod, a single Leviathan’s takes up a full Heavy Support slot. In terms of usability, it’s a mere 100pts to give the model a chance to fire its guns and maybe even assault before it’s shot to pieces. It solves all my problems with this particular model, and does so at a surprisingly reasonable4 price. Huzzuh!

With these organisational loose ends tied off, the army is complete! With my recent additions, the legion is now comfortably over 10,000 points (10,256 on my last count). Before we dive into a huge new group photo, let’s review the exact contents. Deep breath now:

And that’s just about everything covered. Whew! As a footnote, there’s also a unit of 10 Wulfen and a Bjorn the Fell-handed that I built for games of Warhammer 40,000 8th Edition. There’s a poor-ish quality photo of my 8th-edition 40K 2000pts army before a game over here, for posterity.

Allfather willing, that’ll be the last we’ll see of my Space Wolves for some time to come. Of course, no project is ever truly finished – I’d still like to incorporate some MKV Heresy Armour in this force somewhere, a Master of the Forge to represent an Iron Priest, and perhaps another HQ unit such as a Mortitat just to make the army as a whole somewhat legally field-able. I never bothered painting Geigor as I used him for a Centurion conversion back when, but I’d still like to paint him someday for completion’s sake. Such things however are for much, much further down the pipeline – first I need to clear the decks of all the other hobby projects that I’d love to get around to.

For now, I’ll leave you with a dump of photos of the finished project.

1 Thankfully, this is going to end when I (God willing) move into my own house come October. I might even be able to sort out a halfway reasonable set up for photography then too.

2 LOOK HOW MANY LITTLE TOY SOLDIERS I HAVE!1!!1 RAGGHRAFGHGHRAFGHATRAFGH [mouth foaming intensifies]

3 I reckon I could see to adding such a thing to my Iron Warriors army, however..

4 Given the usual associated costs of ForgeWorld miniatures and the size of the model in question.