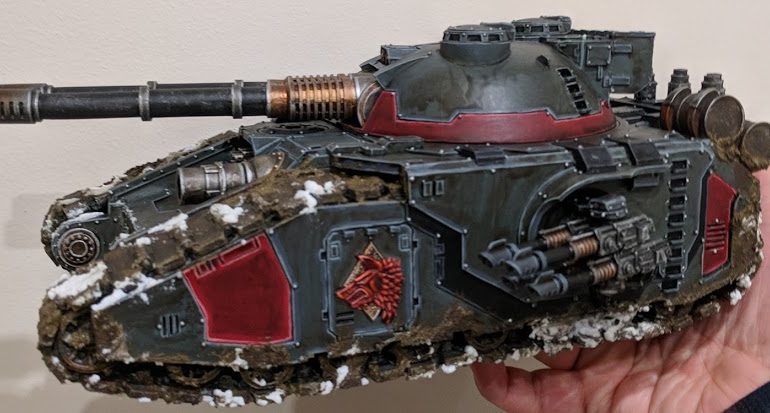 Possibly the biggest (jury’s out on whether it’s actually bigger than my Fire Raptor), certainly the most intimidating individual model I’ve ever built and painted. I’m now happy to call my VI Legion Fellblade tank finished.

It actually took a whole lot less time than I was expecting, to be honest. I’m sure more technical painters looking for solid fades and perhaps neater weathering might take a little longer than I did, but the paint job took less time than assembling the monstrous chassis. The worst thing about this tank is undoubtedly the treads – it’s an absolute, indisputable nightmare getting these things to line up, and the whole thing is so hefty that getting any decent dry fit testing is always incredibly finicky. Ultimately, my chassis went on just a little bit squint, and on top of that the instructions were immensely unclear to the point where I completely missed that the front wheels were connected to the hull with a couple of stabilizers – an error I didn’t pick up on until after I’d mutilated my tracks trying to figure out why they were an entire tread too long.

One of the benefits of being an intentionally “sloppy” painter though is that you can do a lot at the paint and weathering stages to really hide a lot of your minor issues. I’d pinned and filled some fairly noticeable gaps during construction – mostly on the underside of those front wheel stabilizers I forgot about earlier, as well as in places where the wheels meet. However, I’d already established a theme with my armour for my Vlka Fenryka – on all my resin tanks, at least, after painting and sealing the model with Testor’s Dullcote, I’d slob various areas of the tanks treads with Stirland Mud on the tank treads, up the side of the hull and around the mouths of the tread guards on the sides of the tank. Once that dried, I’d add spots of Valhallan Blizzard, and then seal the whole thing down again to prevent them from falling off. In this particular tanks case, I thought the size called for a slightly more economic option for the mud, so I opted for Vallejo European Mud. It’s a lighter in tone than Stirland, so I applied a thick coat of Euro Mud and then mixed a little Stirland into the mix to give it a little more variation in tone – handy for the bigger surface areas!

There’s two reason’s I tend to do this VI Legion tanks – the first time I’d attempted this was on my Legion Spartan Assault Tank, and it was after I’d gotten fed up with the paint rubbing off one or two protruding corners on the underside of the tanks treads – the areas where the tank meets the table. Frustrated that after several attempts at sanding down, cleaning, reapplying primer and paint and varnish to these specific areas, I decided to do dirty up the treads. A side effect of this, is that it also helps cover up any imperfections – tanks with treads built-in tend to have mould slip issues, and the treads can require sanding and filling, and often even then they might be imperfect.. The mud and snow help hide that nicely. The second reason however, is that after applying this mud and snow to the Spartan, it occurred to me that the tank treads are almost equivalent to an infantry or walker models ‘base’ – it’s the area that makes contact with the ground, and it’s a nice opportunity to bring a little bit of that colour and effect that the rest of the army enjoys to the model itself, and helps unify things a little.

So, that’s my Legion Fellblade. It wouldn’t be one of my blog posts (it seems I’m already developing some patterns with these posts) without me putting in a quick “one more thing” at the end though..

Finishing off my Fellblade wasn’t the only hobby related thing I got up to this weekend – I also managed to squeeze in my first ever game of The Horus Heresy, finally being able to utilize the volumes of rules I’ve amassed. I have thoughts, but I reckon they deserve a blog post of their own – hopefully while it’s all still fresh in my mind. In the meantime, here’s my 2000pts of Bloodied Claws that I used.