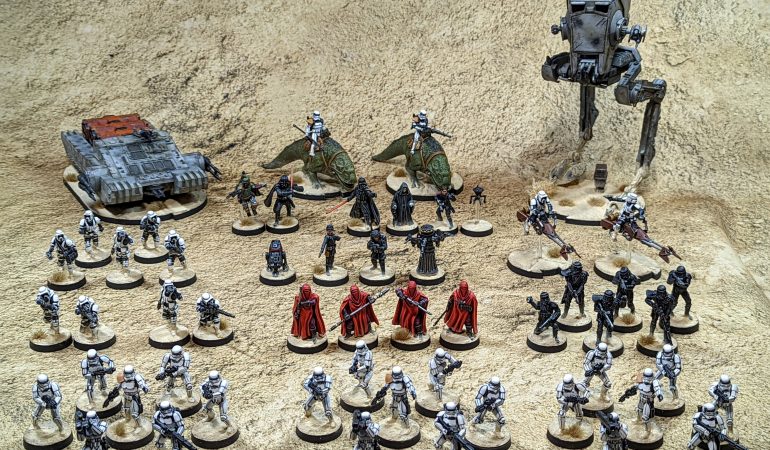 H’chu apenkee pateesa and welcome back for Part Four of Now I Am The Master. With the guts of my Galactic Empire army now complete, this time I’m going to be focussing on the final flourishes – Operatives, Specialists and reinforcing the parts of the army that look a little thin on the ground.

Kicking things off, here’s the Operative variant of Darth Vader.

This is the second Darth Vader model that I’ve painted for this army, so hopefully it’s the better looking of the two. In some ways, I actually found this miniature a little easier to paint – the sleeves and trousers are much more textured surfaces than on the Commander miniature, making it a lot easier to get an obviously different finish here than on the plasteel. The pose on this one also made life a little easier, with a more obvious viewing angle for painting the lightsaber and where to put the centre glow.

The painting process on this model was pretty similar to that of my Commander miniature in Part One – highlighting primarily with a mixture of Black and Elfic Flesh, with a focus on more middling grey tones on the garments and a higher contrast of pitch black to dead white on the plasteel surfaces. Perhaps the biggest departure in my approach to painting this one was on the cloak – this time around, I opted for a far more subdued, lower contrast approach. This was partly due to a somewhat more forgiving shape to the cloak; my brain has an easier time of parsing tight, narrow folds than the big billowing volumes. Whatever the reason, the end result was a cloak that looked – in my opinion – much closer to how it is depicted in the films. It’s pitch black with just hint of shine to it and the miniature looks all the more dark and menacing for it.

Next up is a character that needs no introduction – notorious bounty hunter, Boba Fett.

Boba Fett just seemed like a no brainer Operative to add to the army. His green and yellow Beskar armour adds a nice flash of colour to the army as a whole – and while he stands out as an individual, he never looks completely out of place thanks to the green of the Dewbacks1. Besides that, it’s.. Well, it’s Boba Fett. The mixed reaction to his recent show on Disney+ can’t take away from his enduringly memorable presence in The Empire Strikes Back. More than any other bounty hunter, Boba Fett feels Imperial to me, and above all else that’s why he deserves a place in my Galactic Empire army.

Having spent a ton of time at this point painting white, black and grey, I almost felt a bit intimidated going to paint Boba Fett – there’s a lot more colour on this one!

For the base coats, I opted to paint his undersuit in Stonewall Grey and his armour Intermediate Green, Filthy Brown (more of a dull yellow) and Heavy Red. His poncho thing I did in Vallejo Model Intermediate Green and braid/pouches in Dark Fleshtone. I then went and highlighted most of these colours with the base coat cut 50:50 with Elfic Flesh , then carefully washed each of the segments one at a time so the washes wouldn’t bleed into each other. The armour was washed in Biel Tan green, the poncho with Athonian Camoshade, the undersuit with Nuln Oil, the pouches and reds with Seraphim Sepia mixed with a little Agrax Earthshade. Afterwards, I went back in with the highlight colour and bought up a few choice areas again to make the corners and sharpest edges pop.

For a final step, I applied a little sponge weathering like I’d done on the GAVw Occupier Tank or AT-ST before it, albeit on a much smaller scale – Boba Fett always appeared super scratched up in the original trilogy, and I wanted to capture that vibe. I’m quite happy with the finished model and how it looks, although I do think the model is maybe a little on the cluttered side.

Legion has a number of upgrade kits of varying usefulness, but one set that I couldn’t pass on was the Imperial Specialists. For one, it’s got an R5 Astromech Droid – I absolutely had to have one of those! The main reason I wanted this kit however was for the Imperial Officer miniature. This is about the only really cheap Commander miniature that the Galactic Empire has access to, something I’d like the option to field should I choose to go heavy on the Operative side of things instead. Aside from the Officer and the R5 Droid, there’s an Imperial Comms Specialist and a Medic Droid in there to boot. All of these miniatures can be attached to certain squads as upgrades for various benefits.

Not much to talk about in terms of painting, however. They’re primarily black, with a couple details such pouches, lenses or faces to pick out. I knocked the four of these minis out in a single evening with no trouble at all.

About this point, I was starting to feel like I’d accomplished most of what I set out to do with the army – so I assembled all of my models together and had a think about what I felt like I was really missing.

At a glance, the single Dewback in the army was looking pretty lonely by itself. Being one of the more enjoyable miniatures to paint in the army, I thought it was worth giving the big lizard a little company.

Eagle eyed readers will spot a couple of differences between this Dewback and my original. Most of these changes are down to not having the original in front of me to copy, but to be honest, I don’t really find minor variations like these to be a big deal – no two Dewbacks would be completely identical, right? The biggest differences here are the colour of the Dewback itself – this one turned out a little more green and a little less olive than the original, though I couldn’t tell you exactly why. I also painted the little fastener bits on the reigns as metallic this time. The fur too is a little different, being a little bit darker and blending in a little less with the scales like on the original.

The final key difference on this Dewback is that I built the other two weapon options for the Stormtrooper – the flame rifle and the T-21 rifle. Nothing too interesting to add here – the flame rifle has a red fuel canister attached to the rifle itself, but this was otherwise the same as any other.

Finally, we have another Scout Strike team with Sniper Rifle.

I feel like this unit is cheap enough from a points perspective, quick enough to paint and useful enough on the battlefield that they warranted a second unit. I didn’t bother painting the Scout unit from the second box, however. I’m not overly fond of painting these Scout Trooper minis, so while I’m willing to make an exception for two very useful models, but I’m not going near the other five unless I absolutely have to.

And with that last corner cut, my Galactic Empire army is complete! While there’s still a few things I’d like to add to the force down the line, now is as good as any time to call it a day for now. I’ve really enjoyed painting this force – it’s been quick2, painless and quite rewarding to watch it all come together.

I’ve still one one final write-up left in this series, covering the various bits and pieces of scatter terrain that I painted for the game – alongside some pre-painted Tatooine terrain that I bought from Etsy. In the meantime however, how about a nice family photo of the Galactic Empire army as it is today?

Until next time, thanks for reading and happy wargaming!

2 How often I update my blog and my socials doesn’t always correspond how fast I actually get through painting. To give you an idea of how fast this project came together, everything you see in the ‘finished army’ shot above was finished within the space of the single month, starting from the moment I received my Legion Core Set.